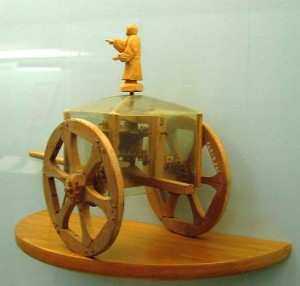 “And David left his carriage in the hand of the keeper of the carriage, and ran into the army, and came and saluted his brethren.”

Numerous Chinese legends refer to a mysterious carriage on which a mechanical rider rode. Its arm was outstretched and continuously pointed south no matter which way the carriage turned. How did it accomplish such a feat? If you’re guessing that magnets had something to do with it, you’d be wrong. Actually, the south-pointing chariot was invented about 800 years before the first navigational use of a magnetic compass.

In the 1960s, Dr. Joseph Needham discovered that the carriage dated back to the third century AD. He also learned that the device did not use magnets. The carriage was actually a highly sophisticated automaton that has since been described as the world’s “first cybernetic machine.”

So how did the  figure know how to keep pointing south? …

To continue reading this article in its entirety go to: http://www.creationmoments.com/radio/transcripts/south-pointing-carriage