Mars was Once Habitable

A note from Pastor Kevin Lea follows this article. 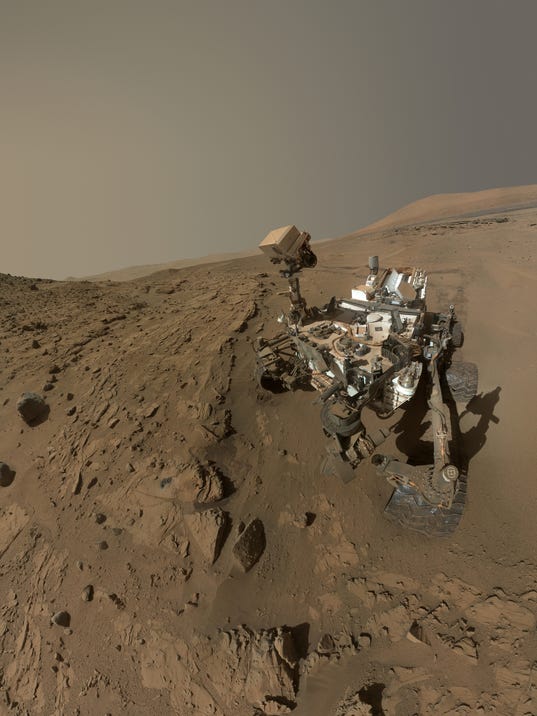 The “building blocks” for life have been discovered in 3-billion-year-old organic matter on Mars, NASA scientists announced Thursday.

Researchers cannot yet say whether their discovery stems from life or a more mundane geological process.  However, “we’re in a really good position to move forward looking for signs of life,”  said Jennifer Eigenbrode, a NASA biogeochemist and lead author of a study published Thursday in the peer-reviewed journal Science.

To read this article in its entirety, go to: https://www.usatoday.com/story/news/2018/06/07/life-mars-building-blocks-life-discovered-3-billion-year-old-organic-matter/681597002/

Note from Pastor Kevin Lea:  This news is no surprise to those who have followed Dr. Walt Brown’s Hydroplate Theory (HPT) explanation for the flood of Noah.  God’s word states that the biblical flood of Noah started when (on one day), all the fountains of the great deep were broken up causing it to rain globally for 40 days and nights, and where the water continued to increase on the earth until the 150th day (Genesis 7:11-24).

This implies that there was a large body of water under the crust of the earth that erupted out when the crust somehow ruptured.   Dr. Brown has shown that before the flood, tidal pumping forces of the moon’s gravity on this subterranean ocean of water would have heated the water to above supercritical temperature and pressure.

The subsequent rupture of the crust would have allowed this pressurized water to escape with extreme, supersonic velocity. As it did, some of the ejected water and material from earth (including pulverized living matter) were ejected into space at escape velocity causing it to go into orbit around the sun.  Some of this water and material would have then collided with Mars and the other planets.  What is being found on Mars now is what has stayed there to this day (some has evaporated out and/or been swept into space by the solar wind and lack of gravity to keep it on Mars or in its atmosphere).

All of the evidence and discoveries from various space projects sent to study Mars are perfectly consistent with (and not surprising to) this biblical and scientific narrative by Dr. Walt Brown.  Tragically, the now discredited Big Bang theory along with Darwinian evolution paradigm have handicapped the NASA scientists from seeing the obvious, even when it is poking them in the eye.

Evolutionary scientists are also at a loss to explain how complex organic molecules can be on Mars.  It should be noted that for almost two centuries they have been at a loss to explain why they are on Earth (since no one can explain how time and chance can create them, here or on Mars).  You may now start to hear from them that life evolved on Mars.  Don’t be deceived.

The student of the Bible and science can explain how life started here and how organics ended up on Mars. The life on Mars—most likely bacteria (not little green men)– was delivered along with an abundant supply of food by debris, especially gigatons of vegetation fragments,  launched from earth as the flood began about five thousand years ago (not the three billion years they use based on their false paradigm) .

This discovery adds to the number of fulfilled scientific predictions that Dr. Brown has made over the years, as noted in his book.  Those who have followed his work have come up with the cliché that “all scientists work for Walt Brown”.  Nations and scientists have spent billions of dollars and man hours on science projects to prove evolution and the Big Bang only to have the results of these projects dispel the myth of evolution and instead support the biblical premise of divine creation followed by a global flood; a flood that affected not only this earth, but the solar system that we live in.

For those interested in reading Dr. Brown’s work, you can do so by going to his online book here:

PS – Tragically, many Christians who search for answers about creation and Noah’s flood have not heard of Dr. Brown or his theory, even though they may subscribe to Answers in Genesis (AiG), Creation Research Society (CRS), Creation Ministries International (CMI), or Institute for Creation Research (ICR).  How could this be when a Google search on: “creation and the flood”, “origin of asteroids”, “origin of comets”, etc., which are all related to Dr. Brown’s hydroplate theory, are either the first hit or on the first page of hits pointing to Dr. Brown’s online book?  Information published by these other creation organizations does not garner anywhere near the same interest that is implied by these search results.

It is my opinion that the main reason for their censorship of Dr. Brown’s work is that most of these organizations have embraced an unbiblical theory for the flood of Noah called Catastrophic Plate Tectonics (CPT).  Many have pointed out to these supposedly biblically based organizations that CPT is both unscientific and is not consistent with the biblical account of the flood (which means it cannot be true).  But they continue to prop it up in their museums, DVDs and books anyway, thus deceiving all those who are drawn into their product selling net.

Dr. Walt Brown’s theory is consistent with the Bible in every detail, and makes so much more sense to people than CPT, which is why it scores so well on Google searches.  Since the hydroplate theory is available for free at creationscience.com as an online book, it competes with their CPT and related products that they sell.  Maybe this is why they feel like they must continue to falsely malign Dr. Brown and his work.

Many are convinced by these organizations to discount Dr. Brown’s work when they accuse Brown of not submitting his work to peer review.  By peer review, they mean submit his book to them for their critique.  This is like saying that no one should have listened to Galileo teach that the sun is the center of the solar system because he had not submitted his findings to the Pope for review.  They push this false narrative to hide their unethical bias against Dr. Brown.  So allow me to suggest that you should read Dr. Brown’s work for yourself instead of being deceived by their censorship and discrediting, you will be glad you did.