NASA has released radar images of the asteroid known as 2014 JO25, as the space rock prepares to fly by Earth on Wednesday night.

Various telescopes and observatories around the planet, including the Arecibo Observatory, have begun sending radar towards the asteroid, while also recording its echoes.

Additional observations of the asteroid are being made on April 19, 20 and 21, which may provide additional images of the rock as it continues its travels in outerspace.

NASA has previously said that the asteroid — which was discovered 3 years ago — will come within approximately 1.1 million miles of Earth. “The encounter is the closest the object will have come to Earth in 400 years and will be its closest approach for at least the next 500 years,” NASA said in an April 18 statement.

Below is a video on NASA’s official YouTube page with the radar images put into motion:

To read this article in its entirety, go to: http://www.foxnews.com/tech/2017/04/19/nasa-has-stunning-video-giant-asteroid-thats-set-to-whiz-past-earth.html

As with many asteroids, the radar image of 2014 JO25 shows that it is a contact binary; where two asteroids have combined into one, connected at what astronomers call, ‘the neck’. 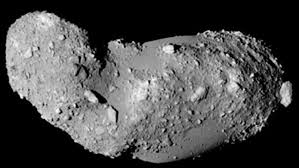 “It’s a major mystery how two objects each the size of skyscrapers could collide without blowing each other to smithereens. This is especially puzzling in a region of the solar system where gravitational forces would normally involve collision speeds of 2 km/sec [4,500 miles per hour].” http://www.spaceref.com/news/viewnews.html?id=1107

Scientists were shocked when they discovered the first contact binary (and equally surprising: asteroids with a much smaller moon or moons, two asteroids of nearly the same size orbiting each other, and even some cases where three asteroids are locked together gravitationally (http://www.space.com/51-asteroids-formation-discovery-and-exploration.html).

These discoveries defy simple explanation. Bodies of mass traveling in/with random directions and velocities in space would not come close enough to each other to be locked gravitationally, let alone continue approaching each other at such a low velocity that they stick together to become one mass connected at the “neck”.  So why did they?  Why are there so many of these objects being discovered when it was seemingly impossible when they found the first one?

There is one theory on the origin of comets and asteroids that easily explains these observations.  Dr. Walt Brown (M.I.T. doctorate in mechanical engineering) presents a plausible and scientifically sound case in his on-line book at creationscience.com.  Dr. Brown’s hydroplate theory explanation for Noah’s flood is consistent with science and the biblical account in every detail.  His chapters on the Origin of Comets  and Origin of Asteroids, will leave the reader (who has some understanding of orbital physics) with a new-found appreciation and understanding for these amazing heavenly bodies.

I expect (based on Dr. Brown’s hydroplate theory) that many more binary asteroids/comets will be found, photographed and studied in the coming years.  If Dr. Brown is correct, everything we learn about them will continue to be consistent with the premise that these remarkable orbital bodies consist of debris that was ejected from a planet near us, and then gravitationally came together in space (with the aide of aerobraking) to become these startling testimonies of the past and omens for the future.

For this they willfully forget: that by the word of God the heavens were of old, and the earth standing out of water and in the water, by which the world that then existed perished, being flooded with water. But the heavens and the earth which are now preserved by the same word, are reserved for fire until the day of judgment and perdition of ungodly men. But, beloved, do not forget this one thing, that with the Lord one day is as a thousand years, and a thousand years as one day. The Lord is not slack concerning His promise, as some count slackness, but is longsuffering toward us, not willing that any should perish but that all should come to repentance.  (2 Peter 3:5-9) NKJV

“And there will be signs in the sun, in the moon, and in the stars; and on the earth distress of nations, with perplexity, the sea and the waves roaring; men’s hearts failing them from fear and the expectation of those things which are coming on the earth, for the powers of the heavens will be shaken. (Luke 21:25-26) NKJV