Some researchers have a new theory about the former planet: It’s made up of a billion comets at its core.

A note from Pastor Kevin Lea follows this article

Ever since poor Pluto was stripped of its planetary status, a lingering question has been, Well then, what the heck is it? Dwarf planet? Big asteroid? Just another Kuiper Belt Object? There’s an argument to be made that it’s all three, but new research suggests it may also be something a little more unique: a really overgrown comet.

Scientists from the Southwest Research Institute (SwRI) combined data from NASA’s New Horizons flyby of the former planet and the European Space Agency’s Rosetta mission that landed on comet 67P to come up with a new explanation for how Pluto came to be.

“We’ve developed what we call ‘the giant comet’ cosmochemical model of Pluto formation,” Dr. Christopher Glein of SwRI said in a release.

The researchers discovered that a large, nitrogen-rich ice glacier on Pluto’s surface named Sputnik Planitia is similar in composition to what Rosetta found on its comet.

To Read this article in its entirety go to: https://www.cnet.com/news/turns-out-pluto-might-really-be-a-giant-comet/

Note from Pastor Kevin Lea:  Every time astronomers send a space probe to investigate objects in our solar system they are surprised and shocked by the data results (visual, chemical, etc.) that these probes beam back to earth.

It has been three years since the New Horizons space probe was able to explore Pluto.  It has taken them this long to come up with this guess about what Pluto really is.  They speculate that it is made up of millions of typical size comets.  But nothing in this article attempts to explain why Pluto has massive frozen lakes of nitrogen, oxygen, methane and even carbon monoxide.1, 2

Where did the millions of smaller comets get these gasses?  How did these smaller comets come together to form Pluto? How did Pluto end up with these gases that are prevalent on earth but not expected in the Kuiper Belt?  Why do they not even try to explain how these gasses got there based on their theories on the formation of the solar system?

The Big Bang paradigm will never scientifically answer these and many other questions because it offers a false narrative on the origin of our solar system and the various bodies inside of it. 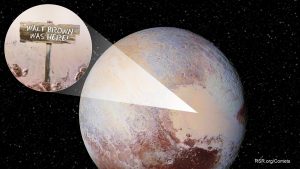 However, Dr. Walt Brown’s theory on the origin of comets, asteroids, and Trans-Neptunian-Objects does provide a scientific answer to all of these questions and many more. You can read his explanations here http://www.creationscience.com/onlinebook/Asteroids.html and here http://www.creationscience.com/onlinebook/Comets.html where you will learn many more things about these objects that are not covered in this article or found in news clippings that are like it.