Consider this a “message in a bottle” from someone who deeply cares about your future.  I and many others are now gone and we are not coming back in time to help you.  We tried to warn you before we left, but you were too distracted or disinterested.  But now, after millions of us have physically disappeared, some right in front of people they were talking to, you wonder if you should have been paying more attention to what we were trying to tell you about your “spiritual future” (heaven or hell).

We were the scourge of the world; hated because we had an exclusive love for the Jesus of the Bible.  Many of you called us insane because we told you how we humbled ourselves and confessed to God that we were sinners deserving of hell; that we wanted to stop fighting against Him and His laws.  We got on our knees and by faith prayed to receive Jesus as our Lord and Savior.

From that day on, our heart was being changed by God in a way that caused us to have a desire to obey His commands.  We told you about how we felt God’s Holy Spirit come into our life and change us.  You were upset that we didn’t want to “party” with you anymore.  You disdained us when we warned you of God’s coming judgment, and how you would be separated from God in a place called hell if you didn’t join us in loving Jesus, who first loved us.

You made us the brunt of your jokes when we refused to abandon the belief that Jesus is THE way, THE truth and THE life and that no one can get to heaven without saving faith in Him.  You cursed us as “haters” and “bigots” for being so narrow minded by not respecting the other religions.

We tried to explain to you that the God of the Bible is not a hater.  He created the universe, and in the beginning it was very good.  But then man rebelled and brought sin and death into the world.  It is man’s hatred against God, not God’s love toward man, that has created the problems on earth.

The True God knows there are no other god’s.  He knows that none of the other “religions” have a Savior.  Jesus came to earth to live a perfect life, then take our sins upon Himself and die on a Roman cross.  He did so to pay the penalty for sin and then raised three days later to prove that He is the God who has power over death and is able to give life to all who humbly come to Him by faith.

God knows that Satan desires to deceive all of mankind into rejecting the true God in order to keep them from going to heaven and instead join him in hell.  Satan inspired the formation of other religions in order to deceive you into rejecting the biblical Jesus.  God sent Jesus so you could have a relationship with Him in heaven.  Satan and his lies are hate.  God and His truth are love.

The real reason that we were taken by God to heaven is because He had promised to remove those who love Him from earth before His judgment falls on those who reject Him and His laws.  The first thing you need to do is find a Bible before they are confiscated and burned.  Then read: 1 Thessalonians 4:15-18 (where the phrase “caught up” means to be quickly taken away from earth to be with God – commonly referred as the “rapture”), 1 Thessalonians 5:9, Luke 21:34-36, and Revelation 3:10.  These and other verses record God’s promises to us.  Promises that He has kept by taking us away to be with Him in heaven, and spare us from the events you will soon be experiencing on earth.

You must not believe the many other reasons people will give for why we have disappeared. Some will deny that we were taken anywhere, despite the numerous eye witnesses to our sudden exit.  Others will say that we were destroyed by God because we were a curse to the world and needed to be eliminated.  Some may even say that we were taken by aliens who transported us off the planet because of our negative vibes that were hindering the world from entering into the new age of Aquarius, where man can learn to have faith in the god within themselves instead of the God of the Bible.  These and many other reasons are likely featured in the news for several days after we are gone, but they will all be lies.  You have to believe the truth and prepare for what is about to come on the world or you will be eternally lost.

If the above is True, Why are so Many “Christians” still on Earth?

Before we left, we tried to warn you that not everyone who says they are a Christian actually is.  Even Jesus warned that in the judgment many will say to Him that they did great things in Jesus’ name, but Jesus will respond that He never knew them (Matthew 7:23).  Jesus only “knows” those who come to Him humbly by faith, confessing that they are sinners in need of a savior.  No one is adopted by God into His family who comes based on their “good deeds”, their church affiliation or membership.  Nor is someone a Christian who tries to come to God through Mary the mother of Jesus or any other “mediator”.

The Bible taught us that there is only one mediator between God and man, and that is Jesus.  We (true Christians) believed God, came to Him through His only Mediator (Jesus) and are now with Him in heaven as a result.  Those who thought they could come to God by some other way were not true Christians and are therefore still among you.

So don’t be surprised that the Pope is still on earth and didn’t leave with us.  The same will be true for the Dali Lama, the Mormons, the Jehovah Witnesses, the Hindus, Buddhists, Muslims and every other false religion of the world.  Therefore, you must not listen to anything they say.  They were deceived before God took us to be with Him and unless they repent and turn to the truth they are still deceived and will try to deceive you.

So Who Can you Trust?

At the moment we are taken, the answer is no one.  All of those still on earth refused God’s offer of forgiveness on His terms and are left behind, with you.

It is critical that you get to the house of someone who was caught up (raptured).  Gather as many of their Bibles and related notes as you can.  Many of us had the Bible and MP3 Bible teachings on our phones, computer hard drives, thumb drives, DVDs, etc.  You must take these to a safe location and hide them.  Then find time to read and listen as much as you can.  We also had Bible apps on our phones, but some Apps used the Cloud which will soon be scrubbed of all biblical information.

You can also go to our church’s web site: calvarypo.org.  It might be taken down by the censor police even before we are gone.  It will certainly be taken down almost immediately after the rapture.  But if you get there in time, we have the entire Bible taught verse by verse in MP3 format that can be downloaded for free.  Do so as quickly as possible.  Download the books of John, Daniel and Revelation first; they are the ones that will be most helpful in the troubling days ahead.  While they are downloading, read the tab about knowing God and respond to God’s invitation to receive everlasting life.  You might have missed the rapture, but you don’t have to miss God’s forgiveness and everlasting life in heaven.  But giving your life to Jesus will soon cost you your physical life as the coming global government will outlaw true Christianity and kill those who refuse to comply.

I am putting out this message before the rapture has taken place, so there is a chance that you are reading this before “we” are gone.  If so, I beg you to ask one of your true Christian friends to show you how to be saved from sin by faith in Jesus before it is too late.  If they don’t seem to know what to say, or have little concern about your spiritual condition, then they probably are not “true” Christians and you need to keep looking.  If during the time they are still here you don’t want to take their advice to join us in true saving faith in Jesus, then you should at least ask them to show you where you can get information after they have been raptured, in case you change your mind in the future.

Don’t be surprised if they are grieved for you and think it is odd that you want to know about what to do after you have been left behind but don’t want to bow the knee to Jesus now.  They will insist on trying to convince you to flee from your folly because you need to believe and be saved now.  But if you refuse, they will gladly show you where they have their Bibles and other information that will help you come to your spiritual senses after they are gone.

If they are true Christians, they should be telling you something along these lines: 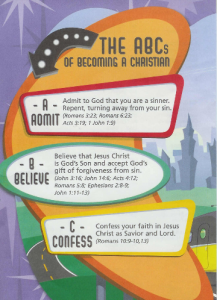 Hope you will join us up here soon!